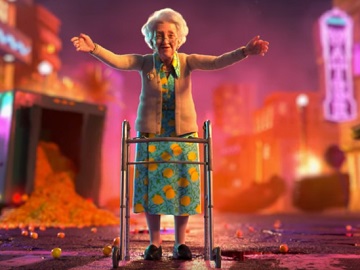 vitaminwater invites people to play the most non-violent game on the internet: Grandma’s Big Hug 4.

The brand has released the official trailer for the upcoming mobile game, created by the makers of lemonware games, in which players control Grandma, whose goal is to squeeze the happiness back into the people she encounters during her journeys. Things are not that easy as they might seem, though, since there are plenty of elements that can get in her way. For instance, she might fall asleep or get distracted if she finds a rocking chair, TV, yarn or a bingo card. What you should look for, instead, are lemons or bottles of vitaminwater zero squeezed.

“In a world full of chaos, greatness starts with a squeeze. lemonware games presents in association with vitaminwater grandma’s big hug 4,” onscreen lines read throughout the 30-second animated trailer, which also features various reviews, such as “gripping gameplay,” and ends with the old lady saying “Come to grandma!”
Available on most mobile operating systems, Grandma’s Big Hug 4 can be played with just one hand.