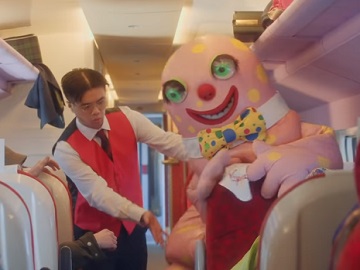 Virgin Trains has released a new advert to mark the disappearance of Virgin Trains as a train operator after 22 years of service.

The spot, created by Cubaka and titled “Final Whistle,” features stars from 1997 – when the franchise began – alongside familiar 2019 faces, including Sir Richard Branson himself, who says, looking into the camera, “Thank you for using Virgin Trains”. He is then placing a boombox on his shoulder and the whole train transforms into a music video that takes viewers on a journey back in time, starting from the 90s, when mobile phones were as big as bricks, and up to the current day, when tickets are on mobiles. Branson also serves as train operator who uses the intercom to tell passengers “All aboard your non-stop Virgin train, from 1997 to 2019. This will be our final journey.” All the passengers begin singing the iconic Dirty Dancing song “(I’ve Had) The Time of my Life”.

Phil Whittingham, managing director of Virgin Trains, said in a press statement “Of course we’re extremely sad that Virgin Trains is disappearing as a train operator, but we wanted to leave as we entered: by having fun. We’re immensely proud of our track record over more than two decades and hope our customers enjoyed traveling with us as much as we enjoyed serving them.”