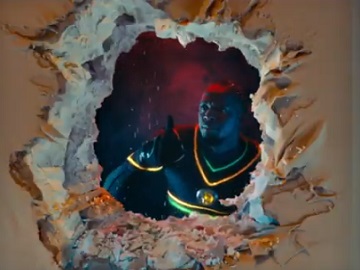 Usain Bolt is back to the small screen as SuperBolt in the latest Virgin Media ad, from agency BBH London.

This time, the spot features the world’s fastest man creating his theme tune, SuperBolt Theme Tune, with the help of a 50-piece orchestra, while he’s running on a treadmill. Willing to hear a faster pace, he asks the musicians to play faster and faster. The pace becomes so fast that violin strings break and the conductor drops his baton, which hits Bolt, causing him to fall and pass through a wall. Luckily, he doesn’t get hurt.

The ad concludes with the voiceover saying “Our fastest widely available average speeds are five times faster than Sky and BT’s” and urging viewers to switch to Super.

The Olympic sprinter, who is a long-time brand ambassador for Virgin Media, has transformed into a superhero after suiting up with the help of an expert tailor in one of the previous spots. The first entirely animated ad starring Bolt features him using his super power of speed to save a train full of football fans.