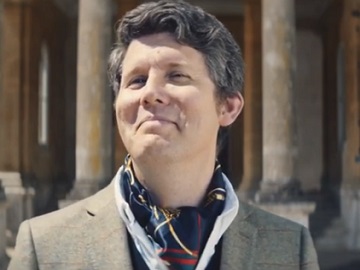 Vauxhall advertises its scrappage and exchange offer “Trade Up” in two new spots, informing that, this June, they are offering £4,000 guaranteed scrappage allowance or more towards a new Vauxhall, or £3,000 part exchange allowance on top of the value of your car.

One of the 30-second adverts, created by McCann Velocity, features a British aristocrat named Lord Darcy Mandeville, who has just sold his supercar for eight hundred and eighty thousand pounds. The voiceover highlights that Mandeville has made a terrible mistake because it could have been eight hundred and eighty-three thousand pounds. “With Vauxhall Trade Up, we’ll give you three thousand pounds above your part exchange value towards a new Vauxhall with 6.9% APR Representative,” says the voiceover at the end of the spot, as Lord Darcy Mandeville gets back to his mansion.

The other advert, from the same agency, features a man who loses out on £4,000 as his vehicle is being picked up and scrapped at the breakers yard.

Vauxhall’s new campaign is set to run across TV, radio, digital and out-of-home until the end of June.