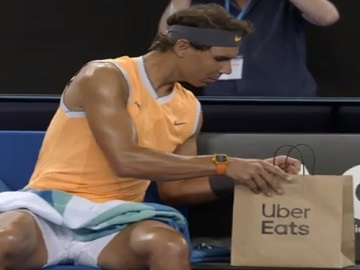 The Spanish tennis player orders a takeaway during the middle of a match in Melbourne, at Australian Open. “Tonight I’ll be eating half Hawaiian, half fuzzy pizza. Extra egg, extra bacon,” he says, after the sportscaster talks about him as looking determined. When his order arrives, just a few seconds later, he says “Perfect”, then grabs the bag and leaves.

This is not the only video he appears, though. He has showed off his acting skills in another ad, in which he approaches the net to confront the umpire’s call and insists that they “are getting dumplings” during a game.

“Tonight, I will be eating gluten-free dumplings with sesame prawn toast,” he announces to the camera.

He is not the only tennis player to star in ads for the food delivery app Uber Eats, at Australian Open, though. Caroline Wozniacki, Daria Gavrilova, Athanasios “Thanasi” Kokkinakis are also featured during matches, as they reveal what they’ll be eating tonight.