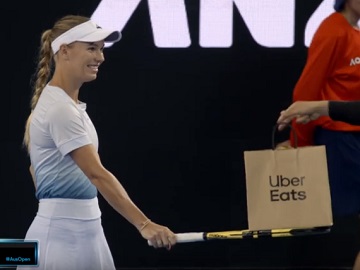 The Danish professional tennis player, a former world No. 1 in singles, stars in a 30-second spot titled “Australian Open – Wozniacki’s return,” that shows her on court, at Melbourne. “Melbourne really comes alive at this time of the year. Caroline Wozniacki always so focused when returning serve,” the sportscaster says, while Caroline is seen ready to return a serve. Suddenly, though, she looks at the camera and reveals that, tonight, she’ll be eating salt and pepper soft-shell crab with a fresh grave Papaya salad. She doesn’t manage to focus on the serve return, but luckily she gets her order deliver right away, on her racket.

Nadal, Daria Gavrilova, Athanasios “Thanasi” Kokkinakis have also showed off their acting skills in spots for the food delivery app. They are also featured during matches, as they reveal what they’ll be eating tonight. Australian tennis star Nick Kyrgios is seen bouncing a ball while beads of sweat roll down his face. Viewers are led to believe the image is part of an Australian Open match since the announcer says “Welcome back to the Australian Open.” However, soon, things take a different turn as Kyrgios looks into the camera and a doorbell sound is heard.

“Tonight I’ll be having garlic bread and a strawberry sundae,” he says, before he is handed a branded Uber Eats bag.

Nadal’s food preferences, on the other hand, consist in gluten-free dumplings with sesame prawn toast and a special type of pizza with extra egg and extra bacon. Gavrilova, on the other hand, is intended to have crackling pork-belly and the Vietnamese ice tea.