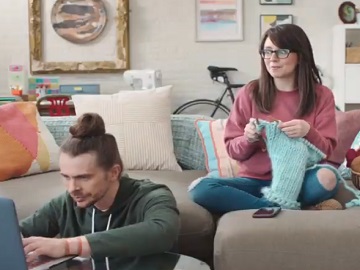 U.S. Cellular informs, in a new commercial, that can bring your own phone or tablet when you switch, have your contract paid off by U.S. Cellular and get, in addition, a $150 bonus.

The 30-second spot opens with the company’s spokesman, Darien Sills-Evans, showing up in a young couple’s living room and telling them about the new offer. “Love your phone, but want to ditch your wireless carrier?” he asks the girl, who’s crocheting on the couch. “Do it. Bring your own phone to U.S. Cellular. We’ll pay off your contract, plus give you an extra $150 to switch,” he adds, which makes the young woman make an analogy. “So it’s like keeping my boyfriend and losing his man-bun?” she asks, cutting then his man bun off with a pair of scissors while saying “keep the good, ditch the bad”.

At the end of the commercial, the voiceover highlights what Sills-Evans said: “Bring your own phone to U.S. Cellular. We’ll pay off your contract, plus give you an extra $150 to switch”.

Sills-Evans, who is also a writer, comedian, and director, has been the national spokesperson for U.S. Cellular since at least 2011. In previous ads, he urges a young man in a vintage store to switch to U.S. Cellular Prepaid and get a free smartphone, and informs a bunch of people around a table that they can switch and get the latest phones for free during the company’s Black Friday Sale event, which makes those people turn into gobblers on their quest to get as fast as possible to an U.S. Cellular store. Another ad, that promotes the company’s Prepaid service and its limited-time offer that gives one month of service free, features Sills-Evans rushing down a hospital hallway along with a pregnant woman and her partner, and another ad, that promotes the Unlimited with Payback from U.S. Cellular, “the only Unlimited Plan that pays you back for the data you don’t use,” sees him flushing money down the toilet.