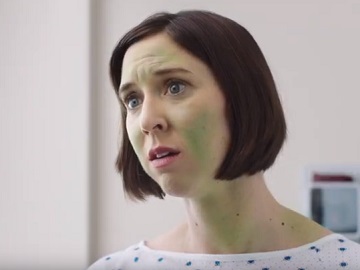 U.S. Cellular has released a new commercial, informing that now everyone – new and current customers included – can get 50% off the latest smartphones including the Google Pixel 3 and Samsung GS10e.

The 30-second spot features a woman whose face is green asking the company’s spokesman, Darien Sills-Evans, who’s portraying a doctor this time, if it’s bad. He answers it’s not bad, putting the diagnosis of “new phone envy”. She reveals she really wants a new phone, but most deals are for new customers, which makes Sills-Evans point out that U.S. Cellular has a smartphone sale for everyone, that allows both new and current customers to get 50% off Google Pixel 3 or Samsung GS10e.

In response, the patient, whose face turns back to normal, says she feels better already and Sills-Evans admits he’s not a real doctor, but this is something she knew.

At the end of the commercial, the voiceover highlights again that at U.S. Cellular now everyone can get 50% off the latest smartphones with no trade-in required.

Another recent commercial released by the carrier informed that can bring your own phone or tablet when you switch, have your contract paid off by U.S. Cellular and get, in addition, a $150 bonus.

The 30-second spot featured Darien Sills-Evans showing up in a young couple’s living room and telling them about the new offer. The young woman concluded that this deal is like keeping her boyfriend and losing his man-bun, or “keep the good, ditch the bad”.

Sills-Evans, who is also a writer, comedian, and director, has been the national spokesperson for U.S. Cellular since at least 2011. In previous ads, he pitches other deals, from the one that implies getting a free smartphone when you switch, getting one month of service free as a Prepaid service customer, and the Unlimited with Payback plan, which pays you back for the data you don’t use.