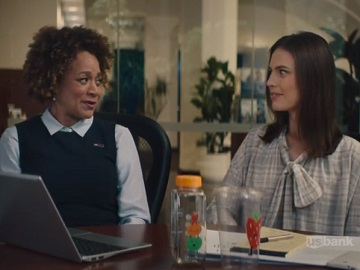 The spot, entitled “Say it, do it,” tells the story of a young woman named Emma Williamson, who manages to pursue her dream of opening a juice bar with the help of U.S. Bank. First, she is seen as a little girl who expresses her plan to become a ballerina, then as a high-schooler who decides to run for president, and as a youngster who decides to run a marathon. Every time she says the things she wants to do, she actually does them. After the marathon, as she enjoys a glass of juice in the company of a friend, she says she is going to start a juice bar.

Toward the end of the video, an U.S. Bank officer is shown telling Emma that the numbers are looking really good and that she’s going to start a juice bar. “At U.S. Bank, we believe hard work works. And for everyone working toward a goal, we are here to help,” the voiceover says at the end of the commercial.

The Minneapolis-based bank’s “Hard Work Works” campaign, created by Carmichael Lynch and aimed at demonstrating how U.S. Bank is there for its customers at the in-between life moments, not just at the big moments, debuted earlier this year, in March. A previous spot featured actress Pooja Shah as a young immigrant woman who’s closing a convenience store when she receives a notice from U.S. Bank’s app that she reached a savings goal. She then tells her father, through a video call, that she’s saved enough money to visit him.

U.S. Bank, the nation’s fifth-largest bank, has branches in 25 states but offers mortgage, commercial and investment banking services across the country.

Tags: US Bank, US Bank Commercial