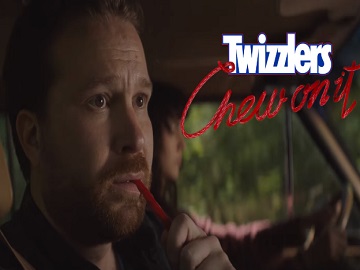 Twizzlers has launched a new ad campaign, consisting of three spots, to urge people to chew on the thoughts that run through their mind.

The commercials, which mark the first work of agency Droga5 New York for the brand, aim to highlight that chewing on Twizzlers might be just the thing you need to deal with various things that don’t let you rest. One of them, dubbed “Only the Road Knows,” features a man sitting in the passenger seat next to his girlfriend, who’s driving, and apparently thinking about something very deep. “There’s no easy answers,” he says while looking through the car window quite distressed. It turns out he’s actually wondering if he’s too old to start skateboarding.

“Chew on it,” a female voiceover whispers at the end of the commercial.

The other two commercials feature a bride having second thoughts on her wedding day – not about the marriage, though, but about the use of exclamation points in a work email, and a detective who’s apparently searching for clues in the woods, but actually trying to avoid spending time with a guy.