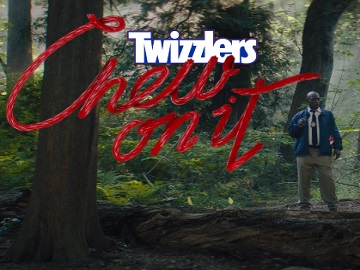 Twizzlers presents its twisted rope candy as the perfect companion to help you deal with challenging thoughts in a series of new ads, created by agency Droga5, New York.

The spots, part of the brand’s new “Chew on It” campaign, feature three different characters chewing on Twizzlers while apparently contemplating a tough situation. The reality is that they’re all actually wondering about ordinary things.

One of the commercials, entitled “Cold Case,” sees a detective standing in the woods and chewing on Twizzlers while encouraging himself to think. “There has to be a solution for this. You’ve been down this path a million times,” he says, making viewers believe he’s trying to figure out something about the case he’s working on. It soon turns out his “problem” is to find a way to not invite Kyle to his birthday party.

“Chew on it,” a female voiceover whispers at the end of the commercial, which is available as a 5-, 15- and a 30-second version.

While each of the 30-second edits air online and in cinemas, only the 15-second edit of “Cold Case” runs on TV.
The other two spots feature a guy who’s traveling with his girlfriend and wondering if he’s too old to start skateboarding and a bride who’s wondering, on her wedding day, if she had used too many exclamation points in a work email.