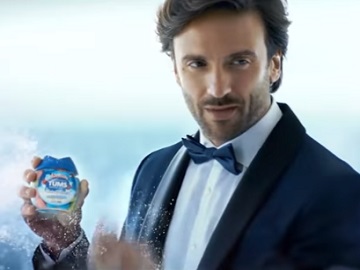 The brand of antacid TUMS has released a new commercial to promote its new Chewy Bites Cooling Sensation, presented as “the coolest new heartburn hero”.

The 15-second spot, rooted in the idea that even the coolest guy in the world can’t escape the fiery wrath of pepper jack cheese unaided, features a young man on a boat, having a snack at what seems a party. Suddenly, though, he finds himself attacked by a piece of pepper jack cheese. Thanks to the new TUMS Chewy Bites Cooling Sensation, he plays it cool and escapes heartburn fast.

This is only the latest installment in the brand’s campaign that promotes the Chewy Bites. A previous spot, presented as “TUMS Breaking News Special Report”, features images captured by a witness at the state fair of a woman used a ping-pong ball by two giant beans. Viewers are advised to try, for fast relief, the new TUMS Chewy Bites with Gas Relief. Another ad featured surveillance footage of a man attacked by a giant curly fry, that was reportedly overtaking the city.

TUMS antacid, which, “unlike some other heartburn medications, does not need to be absorbed into the bloodstream in order to work”, according to the brand, is available at many retail stores, including drug stores, grocery stores and mass merchandisers.