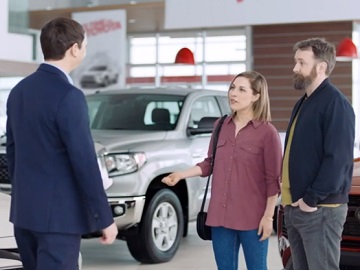 Toyota runs a new ad campaign in Canada, entitled “It’s Time To Toyota,” highlighting, among others, the Toyota Safety Sense package, that includes a variety of advanced safety features.

One of the spots, dubbed “Outside the Lines,” sees a couple in a Toyota dealership asking the sales rep about the safety features that come with no extra cost. Asked about the Lane Departure Alert, the Toyota representative explains that this system recognizes when you unintentionally drift out of your lane so you don’t drive outside the lines. The customer says he doesn’t need that, but after a second thought and several memories that come to his mind, that illustrate various situations in which he went outside the lines, he concludes that he actually needs that safety feature. The flashbacks he has sees a child version of him drawing outside the lines in a color book, pouring mayonnaise even on his hand while trying to pour it on an hot-dog, and crossing the lines of his beard while shaving, not long before visiting the Toyota dealership.

At the end of the spot, the voiceover urges viewers to get Toyota Safety Sense, the brand’s most advanced safety features, at no extra cost, “because safety shouldn’t be optional”. On screen, the 2020 Corolla, the 2019 Rav4, and the 2019 Tacoma are showcased.