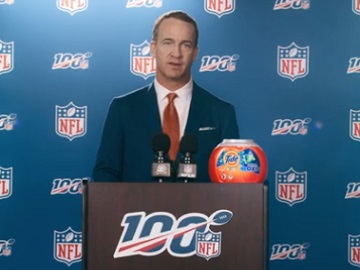 Procter & Gamble has teamed up with NBC, Gwen Stefani, Peyton Manning and more for a new campaign, that declares a New Official Laundry Day.

Sunday is the most popular night to do laundry. But it’s also game day for football fans across the country. This was the “problem” for which Tide has the solution. The detergent brand has released a commercial in which NFL legend Peyton Manning gives fans permission to push their laundry duties to Tuesday night instead. “It happens every Sunday. Your favorite player makes an amazing play. And you miss it because you’re doing laundry. Don’t worry, because the NFL has teamed up with Tide to make Tuesday the official laundry night,” Manning informs during a press conference, highlighting that “now Sundays are now 100% NFL, not for laundry”. When one of the viewers asks why Tuesdays, Manning shows off his white clean shirt and says he washed it on Tuesday.

However, this is only the first intallment in a series that illustrates the all-out battle generated by Mannning’s announcement.

Gwen Stefani, a judge on The Voice, stars in a faux promo for the show, saying that everyone knows that Sundays are for laundry. Baltimore Ravens running back Mark Ingram and the cast of NBC’s “Superstore” also feature in other spots included in the brand’s new integrated campaign, from multi-agency shop Woven, which debuted on September 8 and aims to make sure that no fan misses football because of laundry.