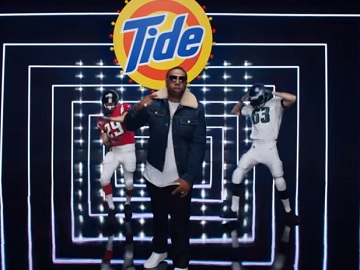 Tide’s “Laundry Night” campaign continues with a new installment. This time, the one taking centre stage, alongside Tide, is Kenan Thompson, who dropped a track on the NFL for Laundry Night.

The spot features Thompson taking a phone call from Gwen Stefani, who tells him that NFL said Tuesday night is laundry night. He says everybody knows Sunday night is laundry night and then assures her he’ll “take care of this”. The actor/singer performs then an original song declaring that laundry night in America is Sunday. Actress and stand-up comedian Melissa Villaseñor also makes an appearance, learning from Thompshon how to fold a fitted sheet. Wrestling legend Ric Flair makes an appearance, as well.

The commercial ends with the tagline “If it’s Sunday night, it’s got to be Tide”.

The Procter & Gamble-owned brand has also teamed up with Gwen Stefani, Peyton Manning and more for this campaign, which aims to make sure that no fan misses football because of laundry.

The first ad features NFL legend Peyton Manning during a press conference giving fans permission to push their laundry duties from Sunday night to Tuesday night instead. Gwen Stefani, a judge on The Voice, stars in a faux promo for the show, saying that everyone knows that Sundays are for laundry. Baltimore Ravens running back Mark Ingram and the cast of NBC’s “Superstore” also feature in other spots included in the brand’s new integrated campaign, from multi-agency shop Woven, which debuted on September 8.