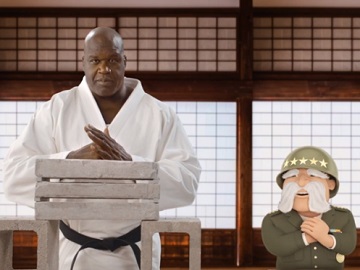 The General has released a series of new ads featuring Shaquille O’Neal, who is not only presented as a basketball Hall of Famer, but also as a man of multiple talents, who knows karate and sings karaoke, who is a hedge cutter and a zen master, an artist and a DJ, a Shakespearean actor and more.

“Everyone knows The General for his affordable auto insurance,” says the retired NBA pro on the 30-second ads, sitting near the The General animated character. “And everyone knows Shaq as a basketball Hall of Famer,” The General says. At this point, Shaq reveals something new about themselves: “But I bet you didn’t know we’re karate masters,” he says, mentioning that “better than a black belt it’s a Shaq belt.” While Shaq manages to break some piles in pieces, The General, who brags about how he choped insurance rates, doesn’t have the same success. O’Neal also says they are karaoke stars, but The General doesn’t prove to be one, though. “At least you’re great at providing coverage to people who’ve let their insurance lapse,” the NBA star tells his fellow.

O’Neal was enlisted as the first pitchman for The General in June 2016 and has starred since then in numerous ads alongside the company’s animated mascot. This deal marked the first time he endorsed an insurance brand.