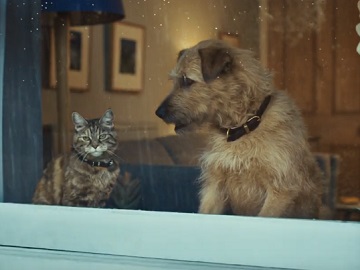 Tetley Tea has launched a £3m marketing campaign, aimed at highlighting that its perfect blends will get literally everyone talking.

The TV spot introduced two new characters – Dave the Dog and Ella the Cat, who pop the kettle on and relax on the sofa over a cup of Tetley tea, while they are alone in the house. “What a day! It’s raining… oh… what’s the phrase?” Dave asks Ella, who immediately gives him the answer: “Raining chaps and gals. Obviously.” Dave then complains that he’s got to take a walk on that weather later, which makes his furry friend point out that this is his own fault because he’s always wagging his tail and for this reason their owner thinks he wants to take a walk. The dog then reveals the tea has that effect on him.

“Our perfect blends will get anyone talking,” the voiceover says at the end of the advert, adding the tagline “Now we’re talking”.

“#NowWereTalking” is a celebration of the togetherness we feel and the endless opportunities a cuppa and chat provides,” the tea brand said.