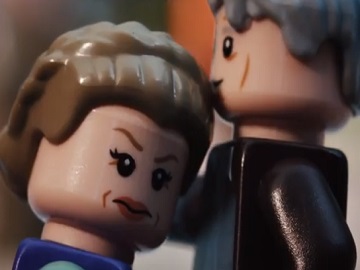 Target promotes the upcoming installment in the Star Wars franchise, Star Wars: The Rise of Skywalker, in a new commercial, titled “A Galaxy of Play”.

The spot, which features multiple Star Wars characters as Hasbro action figures, Funko Pop! bobbleheads, and LEGO
mini figures, informs that, this holiday, the toys of a generation come home. Among them are even the Child, a mysterious alien pursued by bounty hunters on behalf of Imperial interests. There will be a Mattel 11″ The Child plush toy, set to ship starting in February 2020.

The retailer celebrated the global launch of new Star Wars toys, collectibles and other products from Star Wars: The Rise of Skywalker, The Mandalorian, and Star Wars: Jedi Fallen Order, earlier this year, on October 4 (an event called “Triple Force Friday”), with lots of special activities and experiences for the Star Wars fans.

There also are T-shirts that celebrate, with special designs, the heroes and villains from Star Wars: The Rise of
Skywalker, Cal Kestis from Star Wars Jedi: Fallen Order and the crew from The Mandalorian, watches that pay homage to the Death Star and evoke characters like Darth Vader, Han Solo, Luke Skywalker, and Boba Fett, wireless headphones (the Bose special Star Wars: The Rise of Skywalker edition QuietComfort 35), a special edition, Purge trooper-themed Xbox controller, and more.