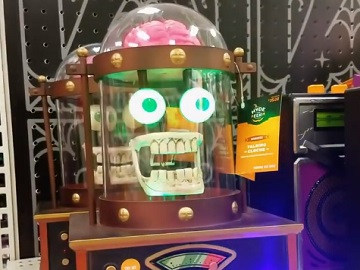 Even though it’s still early September, Target has released a Halloween-themed ad, showcasing some of its products for the occasion.

The 15-second spot, dubbed “Let’s trick & treat,” is set in a Target store and features a variety of items that are available for purchase, while in the background an original song, whose lyrics include “Just watch me shine like a ray of sun,” is playing.

Target now gives you the chance to save $10 when you spend $50 on Halloween costumes, decor and lighting. You will find on the shelves a variety of costumes, from baby and toddler costumes to adults’ costumes, and even pet costumes, costume accessories, indoor and outdoor decor, as well as Halloween lights.

Last year, on October 27th, the retailer hosted a Paw Patrol-themed trick-or-treat nationwide event in its stores, where kids had the chance to go in costume and trick-or-treat their way through the store. Giveaways, treats, PAW Patrol-related toys, and products 15% off, as well as an exclusive showing of a never-before-seen episode of PAW Patrol, which was shown in-store, were among the ingredients that turned that Saturday into a day to remember for millions of kids.

Previous: Adidas x Pharrell Now Is Our Time Collection Commercial
Next: Volkswagen Atlas Families in the Morning Commercial Song – Room for Everyone