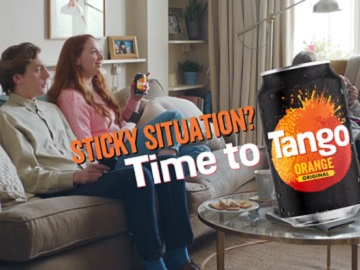 Tango has released a new TV ad, that introduces a new character, named “Tanguru,” and shows you how to get out of a “sticky situation”.

The 30-second spot, titled “Text Message,” features a young woman hanging out with her boyfriend and her parents in the living room, in front of the TV. At some point, she writes a text message for her partner, asking him if he fancies a quickie and adding two eggplant emoticons (aubergines), but she accidentally sends it to her father, whose eyes pop like bubble gum seeing the message. Luckily for her, time freezes for a moment and a woman who introduces herself as her “Tanguru” shows up, hands her a can of orange-flavored Tango and gives her advice on how to style it out. “Just blame it on AutoCorrect,” The Tanguru says. The girl follows this advice and, after taking a sip of the beverage, says she actually meant “quiche” and comes up with the suggestion to have an aubergine quiche for dinner.

The advert, which marks the first work from VCCP for the fizzy drinks brand, ends with the line “Sticky situation? Time to Tango” flashing across the screen.

The brand conducted a wide-range of research before launching the new campaign and was met with positive feedback for the humour. “Clearly we are pushing the boundaries a little bit but the reaction to date has been universally positive,” the brand’s director, Ray Patterson, said in a press statement.