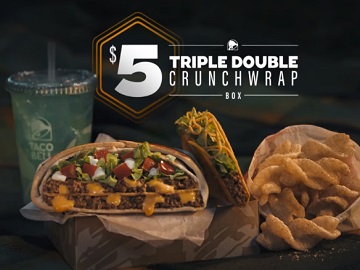 The spot features a young couple enjoying the menu item under the night sky, during the meteor shower of the decade, which they miss because they’re too focused on their food. “Maybe next decade,” the voiceover says at the end of the 15-second ad, introducing then the Triple Double Crunchwrap.

First released in July 2016, the Triple Double Crunchwrap contains double layers of Seasoned Beef, double layers of Nacho Cheese Sauce, and double layers of a Crunchy Tostada Shell, as well as lettuce, diced tomatoes, and sour cream, all wrapped in a grilled flour tortilla. The wrap can also be upgraded to Spicy, which includes spicy ranch sauce and added jalapenos in the top layer.

The $5 Triple Double Crunchwrap box also includes a Crunchy Taco, Cinnamon Twists, and a medium fountain drink. Customers can get the menu item solo for $3.49.