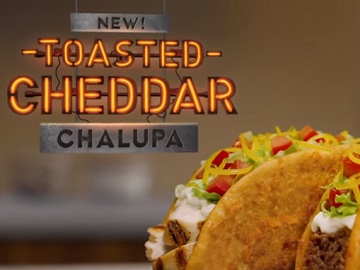 People across the nation are lining up to try an incredible new toasted cheddar dish – the Toasted Cheddar Chalupa, in the latest Taco Bell commercial.

The spot, dubbed “Epic Line,” opens with a guy asking two persons waiting in line what they are in line for. He thus learns that “this place has an insane Toasted Cheddar Chalupa”. As the video goes on, it turns out hundreds and hundreds of people are queueing for a Toasted Cheddar Chalupa from Taco Bell. “There’s a new food obsession sweeping the nation,” the voiceover says before a young woman who’s also in line, near the beach, says that “they toast the cheddar in a cool way, but not like in an obvious cool way”.

The commercial ends with the voiceover introducing the new Toasted Cheddar Chalupa, which features 6-month-aged cheddar toasted right onto the iconic Chalupa shell.

The new chalupa debuted nationally September 12 as part of chain’s larger menu shake-up and will be available at participating locations nationwide for a limited time only, for $2.49.