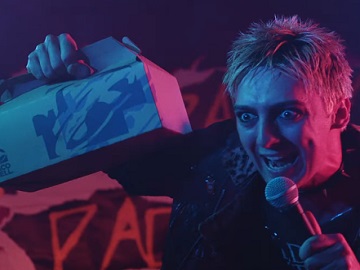 Taco Bell advertises its limited-time Party Packs in a new commercial, highlighting that you can get free delivery on your first Taco Bell order of $12 only on Grubhub.

The spot, dubbed “Punk Show,” features a Grubhub delivery guy delivering to a punk artist on stage some Party Packs. The latter then begins to perform an original song about Taco Bell’s packs. The delivery guy is then shown delivering Party Packs to other groups of people, who – seeing him – start shouting “Taco’s”.

“Bring the party with Taco Bell Party Packs,” the voiceover says at the end of the commercial, urging people to get their first delivery of $12 or more free only on Grubhub.

This is not the first time the Mexican-inspired quick-service restaurant chain promotes its Party Packs. A previous commercial featured various gangs as they get together for tacos.