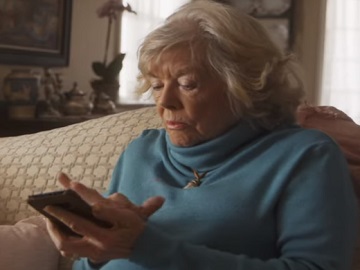 T-Mobile has released its commercial for International Women’s Day, highlighting that T-Mobile now covers 99% of Americans with LTE and this is why they are America’s Network.

The 60-second spot tells the story of a grandmother who never wanted a cell phone, justifying that “technology wasn’t something to fiddle with,” but ended up having one due to her family, worried about where she spent her days. Things took a turn when her daughter got her a phone from T-Mobile: the old lady started texting, taking selfies, playing games, including ones that involved killing zombies, and she even used dating apps. Thanks to one of these apps, she actually met a man named Germaine, “who she insisted resembled Paul Newman”.

As the commercial ends, viewers get to learn that when the woman’s granddaughter, Cassie, helped grandma post photos, “everyone realized they had been so worried about HOW grandma was, they had never stopped to ask WHO she was”. Old pictures of grandma are then featured, giving viewers a glimpse into her life, that has apparently been full of challenges and memorable experiences, that included marriage, career, and involvement in social causes over the decades.