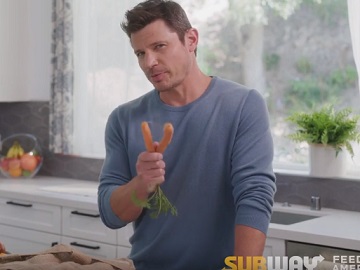 Subway teamed up with Nick Lachey and Feeding America to get fresh produce into the hands of those who need it the most, as part of the Ugly Veggie Rescue initiative.

The singer stars in a 90-second ad in which he talks about this campaign and urges viewers to adopt an ugly veggie and help make a difference. He reveals that in between concert dates and TV gigs he’s mostly trying to get his finicky kids to eat more fruits and vegetables. He then says that for many families out there it’s not that simple and points out that millions of Americans lack easy access or affordable access to the fresh fruits and vegetables we all need and meanwhile billions of pounds perfectly good produce are wasted every year. He then introduces Theodore, an oddly-shaped tomato that is objectively ugly (a lot like his fashion choices from the ’90s) and highlights that “less than perfect produce deserves a chance”.

Lachey also says he teamed up with Subway, Feeding America and 13 funny looking friends to help get fresh produce into the hands of the people who need it the most and explains how you can contribute. Thus, you can donate as little as $1 to adopt one of the 13 ugly veggies but kind of adorable vegetables – including Ava the avocado, Odette the onion, Carol the cucumber, and more – to help get fresh produce to Feeding America member food banks across the country.

“Give these unloved veggies a purpose and help families in need. It’s a win-win,” Lachey says at the end of the video, which also specifies that by adopting an ugly veggie you are adopting a photo of the vegetable and not the physical vegetable and that all “adoption” payments will go directly to Feeding America to help secure fresh produce. Subway also declares that from 9/18/2019 to 10/18/2019 will match all donations made on uglyveggierescue.com to Feeding America up to $100,000.