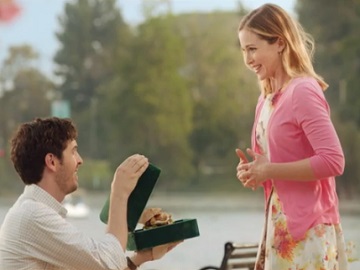 Subway advertises its new Italian Ciabatta line-up in a series of new ads, each focused on a specific Ciabatta.

One of the spots features a young couple in a park, with the guy down on a knee in front of his girlfriend, opening a big ring box that hosts the new Savory Chicken Pesto Ciabatta from Subway and asking her if she wants to have lunch with him. “I don’t believe it,” the young woman says, excited to see the menu item.

“CiabattaBelieve it at Subway” an onscreen line reads toward the end of the commercial, which then showcases the new Chicken Pesto Ciabatta, made with fresh mozzarella.

The collection will be available at participating locations nationwide for a limited time.