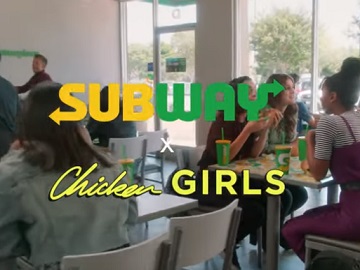 Subway advertises its Chicken sandwiches in a new commercial, featuring the Chicken Girls.

The spot opens with a group of four girlfriends entering a Subway restaurant and placing an order. They all order chicken-based sandwiches: one of them wants to try to rotisserie-style chicken, another one asks for a sweet onion chicken teriyaki, the third one asks for roasted chicken and the fourth one asks for chicken and bacon ranch melt.
Eventually, the cashier realizes, as he watches them eating the sandwiches at the table, the reason why they are called the Chicken Girls.

“Subway. Home of the Chicken Girl,” the voiceover says at the end of the commercial.