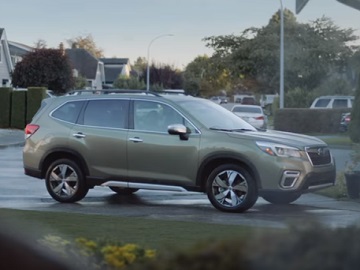 Subaru has released a new commercial, showcasing the 2019 Forester, which features DriverFocus Alert, a system that can sense when drivers take their eyes off the road and alert them in time to react.

Entitled “A Parent’s Imagination,” the 60-second ad shows three concerned parents of teenage drivers as they imagine all kinds of accidents, knowing that their kids are at the steering wheel and there are so many distractions. A fourth parent, mother of a teenage daughter, has her face brightened by a smile as the girl comes back home safe and sound at the wheel of the family’s Forester Touring. The ad shows that she was distracted, too, along the way – at a crossroad, actually, where she looked at her phone, in the cupholder – but the DriverFocus, the monitoring system that identifies signs of driver’s distraction, reminded her to pay attention, so she immediately braked and avoided a collision.

“Parents have a way of imagining the worst, especially when your easily distracted teenager has the car. At Subaru, we know parents worry about the real threat of distracted driving,” the voiceover says, adding that “the new 2019 Forester senses when you’re distracted and alerts you, so you can react”.

The spot, from agency Carmichel Lynch, is part of a national ad campaign aimed at showcasing the redesigned 2019 Forester and some of its most important features in terms of safety and off-road capability. Other two commercials run across TV and other channels.

Previous: Royal Air Force Women in the RAF Advert – No Room for Clichés
Next: Capital One Quicksilver Card Gary Commercial – Feat. Samuel L. Jackson in the Backseat of a Car