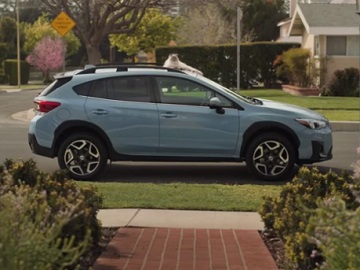 Subaru has brought back the Barkleys for a series of new ads that focus on the Subaru Crosstrek. The spots, part of the “Dog Tested. Dog Approved” campaign, aim to showcase some of the most important features of the Japanese automaker’s SUV.

One of them, titled “Scram,” sees the Barkleys inside their home, watching a cat as she’s sunning of the roof of their family’s Crosstrek. The feline gives no sign of wanting to leave until Mama Barkley comes up with the idea of using the SUBARU STARLINK Remote Horn and Lights.

“The Subaru Crosstrek. With STARLINK Remote Horn and Lights. Dog Tested. Dog Approved,” the voiceover says at the end of the commercial.

Another ad, dubbed “Lunch Stop,” shows the Barkleys in a Subaru Crosstrek, stopping by at a hot dog stand, where they meet a family of Dachshund that don’t share the same passion for hot-dogs.

Subaru’s “Dog Tested. Dog Approved” campaign was launched in 2014 and featured the cute furry family of Labradors and Golden Retrievers doing various activities that any family does, such as dropping the kid at school, play pranks on each other, and more.