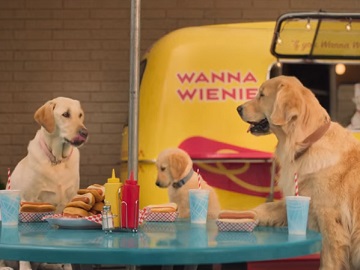 The Barkleys are back in a series of new ads for Subaru, part of the Japanese automaker’s “Dog Tested. Dog Approved” campaign.

One of the spots, entitled “Lunch Stop,” features the family of Labrador and Golden Retrievers stopping their Subaru Crosstrek at a hot dog stand to have some hot dogs. As they’re looking at the menu item, a family of Dachshund shows up, but they are not eager to eat, despite the invitation.

Subaru’s pet-friendly campaign debuted in 2014 and showed the Barkleys performing tasks most Subaru owners would recreate with their own families, from dropping the kid at school, learn how to parallel park and play pranks on each other, all while using a Subaru, including the Ascent, Impreza and more.

Previous: Dr Pepper Fansville Season 2 Commercial
Next: State Farm On the Board Commercial Song – Employees in 100 Acts of Good Competition