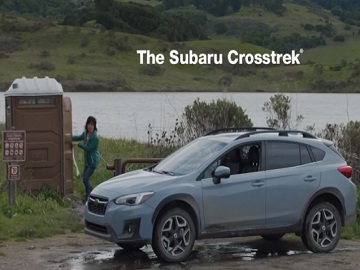 Subaru has released a series of new ads to showcase some of the most important features of the Subaru Crosstrek.

One of the spots shows a woman who, thanks to the Android Auto available in their Crosstrek, answers an urgent request from her boyfriend. The latter, who it turns out is in a public toilet, sends a text message to his partner, who immediately grabs a roll of toilet paper and runs to hand it over to him.

“Android Auto in the Subaru Crosstrek,” the voiceover says at the end of the 15-second ad.

Another spot, that focuses on the Crosstrek’s 8.7 inches of ground clearance, features a man who discovers that his dog, Rufus, isn’t quite ready to head home from a hike. He calls him several times until he finds him, to his surprise, hiding under their Subaru Crosstrek.

The automaker now gives customers the chance to get multiple offers as part of its “A Lot of Love” Event, taking place through September 3rd. Thus, Subaru fans can get 0% APR Financing on select new vehicles, like the 2019 Subaru Outback.