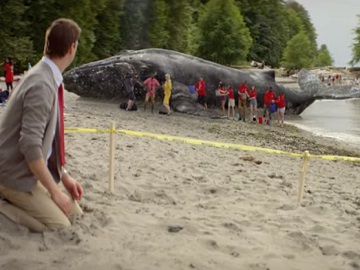 State Farm has released a hilarious new ad that shows how a good-natured competition between State Farm employees Max and Chuck heats up as they try to complete the employee challenge to each do 100 acts of good.

The 90-second spot, entitled “On The Board,” features the two men as they do all kinds of good deeds, from saving a co-worker, to helping an old lady cross the street, to saving a turtle and a beached whale, to planting trees, running marathons, shave for cancer and more.

“At State Farm, giving back starts with us,” the voiceover says at the end of the commercial, urging then viewers to join the company at NeighborhoodofGood.com.

The soundtrack music is the 2018 single “Bangkok Cock Fight” by Lee Hazlewood’s Woodchucks, from the album “Cruisin’ for Surf Bunnies”.

The insurance company has also enlisted Willis Earl Beal (also known as Nobody) to promote the “Neighborhood of Good”. In a video released in January 2018, the artist is featured performing a cover version of the 1985 hit single “Don’t You (Forget About Me)” (by Scottish rock band Simple Minds) for people at a shelter during the holidays, when the room is filled with persons of all ages, and after the holidays, when the room is almost empty.

The “Neighborhood of Good” enables people to “Turn caring into doing” by helping them find and volunteer for the causes that matter to them, right in their neighborhood. Beal is not the only artist volunteering, though. Khalid teamed up with CAMMO to help veterans manage PTSD and readjusting to civilian life, Judah & the Lion, one of Nashville’s most genre-bending bands, have partnered with LovePup to help kids with autism, and country pop singer and songwriter Kelsea Ballerini went back to her high school to help give students the boost they need to take off.