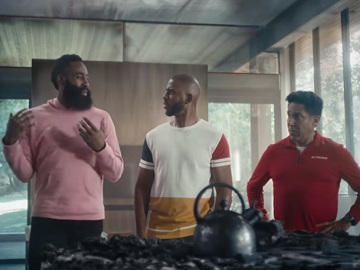 Chris Paul, James Harden, and Oscar Nuñez are back to the small screen, in a new commercial for State Farm. This time, Harden’s food cravings turn into Chris Paul’s kitchen nightmare, but – luckily – the latter can count on State Farm Agent Cole Perez to help with the cleanup and the coverage.

The 30-second spot, titled “Explosion,” features Harden putting a box of Chinese food into Paul’s microwave and producing an explosion that leads to a quite damaged kitchen. When Paul’s State Farm agent, Cole Perez (played by Oscar Nuñez), shows up and takes a look around, concludes that it’s a good thing Paul kept his fire extinguisher up to date and tells him to not worry about the smoke damage, because he can help.

At this point, Harden – eager to get away with it, asks his teammate what he did to his kitchen, but a sign he unintentionally left is the proof that it was him the responsible one for the explosion.

Chris Paul has been associated with State Farm for long. He also portrayed his identical twin brother named Cliff Paul who worked for the insurance company in a series of commercials that debuted in 2012 and were a staple of NBA and college basketball broadcasts. He has also appeared alongside his teammate James Harden and Nuñez in several other ads. In one of them, dubbed “Inner Dialogue,” the two Houston Rockets and Nuñez prove they all get each other so well they make a conversation look like a staring contest since they only use thoughts to have a dialogue.

NBC’s “The Office” star Oscar Nuñez started to portray agent Cole Perez, Paul’s new State Farm agent, in December 2017, as part of the “Get an agent that gets you” campaign, created by Translation. The first installment, entitled “Grand Tour”, saw Chris Paul on a ride with Harden, Trevor Ariza and Nuñez, of course, singing Backtreet Boys’ 1999 hit single “I Want It That Way”.