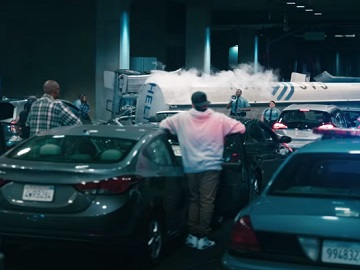 State Farm advertises its services in a hilarious new commercial.

The spot features a State Farm customer named Mike (played by Aflamu Johnson) calling his State Farm agent (played by Robyn Holtz, a real State Farm agent in Texas) and informing her that he was in a fender-bender. When he gets out of the car, his voice changes, becoming higher pitched, which makes the State Farm ask if he is sure he is ok.

As the ad goes on, it turns out a truck filled with helium is leaking, and this causes everyone’s voices to change. Another funny moment is ensured by a police team arriving in the tunnel and urging people to remain calm, highlighting there’s no reason to panic.

The commercial ends with the onscreen line “Here to help weird wrecks go right” and with the voiceover encouraging viewers to go with the one that’s here to help life go right, State Farm.

Created by agency DDB, the spot also features Danny Gonzalez as the passenger and Marcus Brown as the cop with bullhorn.