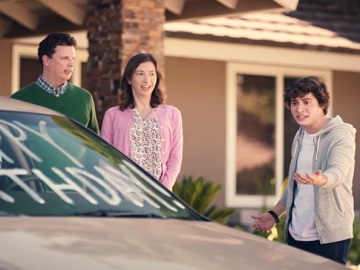 State Farm highlights, in its latest ad, that – from sweet new wheels to hand-me-down hoopties – your State Farm agent has them covered.

The 30-second commercial, titled “Beige Betty,” features State Farm agent Stephanie Fetzer congratulating a customer – a young woman named Kim, for getting her own car with her own insurance. “No more driving that old hand-me-down,” Kim says, mentioning that her parents handed it down to her little brother. The next scene features her little brother reacting to his birthday surprise, which consists in his sister’s previous car, which it turns out is called “Beige Betty”. “No, not Beige Betty. You, guys, can’t do this to me,” the boy tells his parents, who seem delighted by their gift idea. “How do you expect me to ride this?” the teenager asks, which leads to an unexpected answer from his father: “Just turn the key and yeah… it’s automatic. Dual cupholders…”.

The commercial ends with the onscreen line “Here to help new rides go right” and with the voiceover urging viewers to “go with the one that’s here to help life go right”.