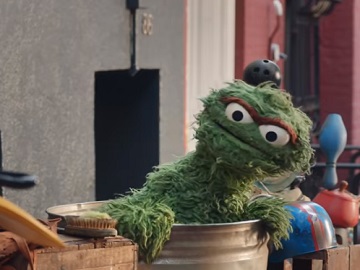 Squarespace has “tapped” Sesame Street’s Oscar the Grouch to star in its latest commercial, which aims to illustrate how your work on a Squarespace site can change your life.

The spot shows how the bin-dwelling muppet transforms from a grumpy loner to a famous sculptor thanks to a young woman who says his collection of trash is artwork and decides to create a Squarespace website for him. “Hang on, you want to put even more trash on the internet?” asks Oscar from his trash can. His expectations are exceeded when he becomes, just like the woman had told him, famous. From fans gathering to take pictures of him to collaboration, propositions is a short way. Oscar is asked by a gallery owner, who thinks the public will lose their minds seeing Oscar’s art work, to fill his white cube gallery with rubbish. Eventually, he opens his own gallery.

Oscar was recently the star of an SNL spoof where David Harbour played his origin story à la the Joker.

Sesame Street’s 50th anniversary is celebrated this year through a series of other initiatives. Among them is also the sale of 25 unique trash cubes, designed by real-life garbage sculptor Justin Gignac, which are filled with objects “found” on Sesame Street, such as giant paperclips, cookies and yellow feathers. Money will be donated to nonprofit organisation Sesame Workshop. Other show characters starred, earlier this year, in a campaign for Farmers Insurance.

Squarespace has also enlisted, in the past, several other celebrities including Keanu Reeves and Idris Elba to star in its advertising campaigns.