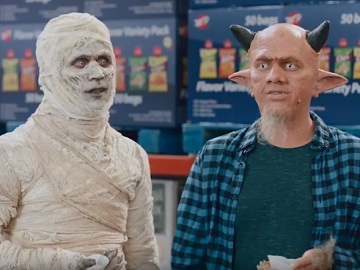 Spectrum has released a new ad to highlight that “complicated streaming is evil” and presenting Spectrum TV as a much better option.

The spot features the Death, Gary, the ventriloquist’s puppet, the Mummy and the Demon shopping in a warehouse. When the Mummy and the Demon return to Gary and the Death each with one sample, the Death tells them quite nervous that they should have gotten lots of samples. Asked about the reason why, the Death reveals he had decided to stream on his TV shows from different streaming services hoping he would save some money, but he ended up paying more and getting less and now he has to be “fiscally responsible”. “Well, that was dumb,” the Demon replies, saying he has horns brains and he wouldn’t do that.

The commercial ends with the voiceover saying “Complicated streaming is evil. Spectrum TV is painless”.

In another previous ad, that promoted the company’s mobile unlimited plan, Gary and some of his friends, namely the Demon, the Mummy and Mr. Werewolf, went to a Spectrum store and found out that, “at Spectrum Mobile, it doesn’t matter how many lines you get because unlimited is always $45/line.” The spot ended with the tagline “Other mobile carriers bad. Spectrum Mobile good”.

Spectrum’s “Monsters” campaign, developed by creative agency Something Different and launched in April 2017, also features a mad scientist, Mrs. Werewolf, and a Vampire family. Other spots tackle, instead, issues like service disruptions, deceptive pricing, lack of channels and features. So far, things like automatic service charges, complicated Video on Demand, slow internet, and others have been described as evil, and DIRECTV has been targeted by Spectrum, being presented as “Bad” while Spectrum as “Good”.