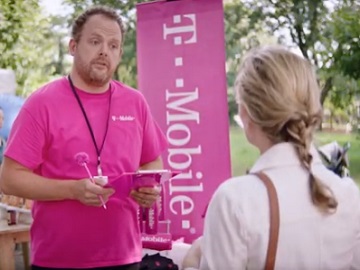 Spectrum targets T Mobile in its latest commercial, which encourages viewers to choose Spectrum Mobile for service with no gimmicks.

The 30-second spot features a T Mobile salesman at a market who stops a woman telling her that, if she becomes a T Mobile customer, she can have a free taco. Surprised, the woman asks him if he wants her to choose service based on free tacos, saying this is wrong, which makes the employee correct her and point out that it’s “free taco,” not “tacos”. He’s also telling her that he can give her the company’s lowest price if she gets a bunch of lines, but the lady doesn’t hesitate to answer that this is wrong, too. “You know how they say, two wrongs make right,” answers the man, who keeps insisting.

However, the woman decides to walk away and leave him talking to himself.

“T-Mobile is selling it. Don’t buy it,” the voiceover says at the end of the commercial, urging people to choose Spectrum Mobile for service with no gimmicks.

Spectrum is known for tackling, in its advertisements, issues like deceptive pricing, service disruptions, lack of channels and features. So far, things like automatic service charges, complicated Video on Demand, slow internet, and others have been described as evil, and DIRECTV has been targeted by Spectrum, being presented as “Bad” while Spectrum as “Good”.

Launched earlier this year by Charter, Spectrum Mobile, available to Spectrum Internet customers, offers unlimited or by the gigabyte data plans on “the nation’s largest, most reliable LTE network,” plus a nationwide network of WiFi hotspots, allowing customers to pick the monthly LTE data option that’s right for them: By the Gig, which costs $14/GB and lets customers pay for the GB of shared data they use each month, and Unlimited, which costs $45/line and has no monthly data usage limits (but reduced speeds after 20GB).