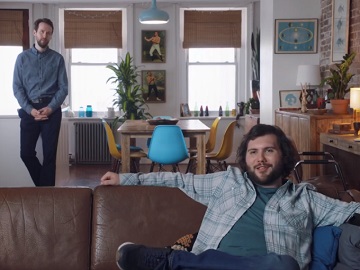 Spectrum has launched a series of new ads starring C.J. Vana and James Coker as roommates, to tout its services, including Spectrum Internet, which provides “faster and reliable Internet,” Spectrum Mobile, and Spectrum On Demand, which allows you to watch shows or entire seasons On Demand for free.

One of the ads, highlighting that Spectrum Internet delivers faster speeds more consistently than anyone else, features the two friends in the living room, with Coker’s character declaring that Spectrum has the fastest starting Internet speeds and that they also deliver those speeds more consistently than any other provider. “Says you,” his roommate says ironnically, which makes Coker mention that says a new report from the FCC. “FCC? That’s not a real thing. You just made that up,” replies Vana’s character, who’s sitting on the couch. Coker tells him that FCC stands for the Federal Communications Commission, which regulates radio, TV, cable. “Sounds ofish,” says the roommate. Coker then learns what “ofish” means – “official”. Vana wants to know if those from the FCC have badges and if they wear tweed jackets and concludes, after finding out that they wear tweed jackets, that it is indeed official.

The commercial ends with Coker stating “Spectrum Internet. Faster speeds more consistently than anyone else.”

C.J. Vana and James Coker co-star in several other ads for Spectrum, part of an integrated campaign that showcases the company’s services.