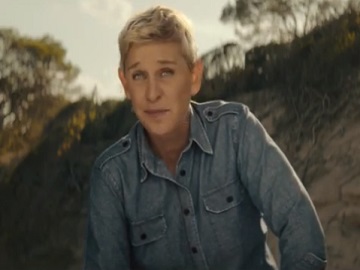 After its longtime “Monsters” ad campaign, which targeted its competitors, Spectrum has enlisted Ellen DeGeneres to star in a new commercial for the mobile service.

The spot, dubbed “Island,” features a bunch of cavemen on an island as they are urging one of their fellows, named Joey, to leave the island through the water up to another island and then get back. The latter comes up with the idea of building something that could stay on top of the water and enable all of them to go, but his community members don’t accept it. Eventually, Joey ends up underwater.

“Eventually somebody realizes there’s a better way to do things. Like a new kind of mobile service with the fastest overall speeds. It’s a better way to mobile. It’s Spectrum Mobile,” Ellen Degeneres says at the end of the commercial.

In another similar ad, featuring a group of pirates, the comedian touts Spectrum Mobile’s honest pricing with no surprise fees ever.

The charismatic TV host also serves as a voiceover for multiple other Spectrum ads. One of them, that carries the tagline “Think Forward,” showcases how Spectrum will help people have “smart homes,” with access to the latest technology to manage their home network.

Ellen DeGeneres is no stranger to advertising campaigns. She has also starred in commercials for CoverGirl, JCPenney, and more.