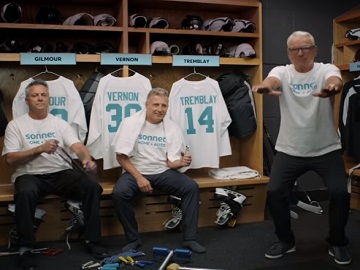 Sonnet Insurance celebrates its status as proud partner of the NHLPA in a new commercial.

The 30-second spot, dubbed “Warmup,” opens with hockey players William Nylander, Samuel Drouin and Johnny Gaudreau doing a spinning session in the locker room. Former professional players Mike Vernon, Doug Gilmour and Gilles Tremblay, who are also there, doing a warmup, are then asking the young stars if they they are playing hockey or going for a bike ride.

“Hockey has changed and so has insurance. You can now get insured completely online,” the voiceover says at the end of the commercial, adding the tagline “Beauty”.

This is not the first installment featuring young hockey stars and former hockey stars Vernon, Gilmour and Tremblay. A previous commercial featured them in the same locker room, getting ready for a game each group in their own way: the young stars with “non-GMO, hippy-dippy, dolphin-friendly, kale smoothies” and the “old” stars with spaghetti and meatballs.

The digital home and auto insurance brand, introduced in 2016 by Economical Insurance in Canada, appealed to its target audience using optimism in its advertising campaigns. The launch campaign, aimed at inspiring Canadians to have a glass full approach, was also centered on the idea of optimism. Ads available in both English and French have been released by the company, showcasing its products and services and highlighting how easy and hassle-free people can now buy home and auto insurance.