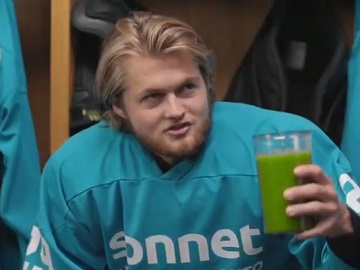 Sonnet Insurance highlights, in its latest commercial, that hockey has changed and so has insurance.

The 30-second spot features hockey players William Nylander, Samuel Drouin and Johnny Gaudreau as members of the Young Stars, who are ready to face The Legends in an epic game. Meanwhile, they are in the locker room, preparing with “non-GMO, hippy-dippy, dolphin-friendly, kale smoothies. At this point, former professional players Mike Vernon, Doug Gilmour and Gilles Tremblay, who are indulging themselves with spaghetti and meatballs, ask the young stars if they don’t carb-load anymore, which leads to the young stars giving them a meaningful look.

“Hockey has changed and so has insurance. You can now get insured completely online,” the voiceover says, adding that Sonnet Insurance are proud partners of the NHLPA.