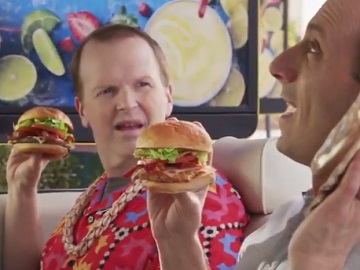 The 15-second ad features the chain’s longtime spokesmen, NYC-based former “The Colbert Report” writer Peter Grosz (driver’s seat) and Chicago-based improv comedian T.J. Jagodowski (passenger’s seat), having a conversation in their car about the ingredients of Sonic’s new King’s Hawaiian Clubs. Holding a conch to his ear, Grosz lists what he hears, such as “bacon, Swiss cheese, juicy chicken on a King’s Hawaiian bun”. Asked by his fellow what else the conch is saying, Grosz declares that it says Jagodowski still owes him that $30.

The commercial ends with the voiceover urging viewers to hurry in for the King’s Hawaiian Chicken or Burger Club and try Order Ahead to get happy hour any time.

The new lineup of club sandwiches made with King’s Hawaiian buns marks the first time Sonic Drive-In collaborated with King’s Hawaiian. The fried chicken version features a piece of fried chicken and the Burger Club features a burger patty. Both of them are topped with lettuce, tomato, Swiss cheese, bacon, and Sonic’s Signature Sauce, a blend of honey mustard and BBQ sauce.

Available starting on April 29 and priced at $4.99 each, they will be available for a limited time only.