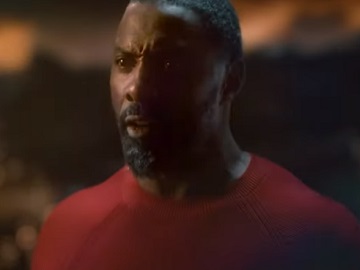 Sky has released a new advert, giving viewers a glimpse to the movies set to air on Sky Cinema this Christmas.

The 40-second spot features Idris Elba singing 12 Days of Christmas and interacting (more or less) with characters from movies that are part of the channel’s holiday line-up, including LEGO Movie, Avengers: End Game, The Nutcracker and the Four Realms, Mary Queen of Scots, Captain Marvel, The Mule, LEGO Movie The Second Part and more. The award-winning actor is first shown at a gathering with friends, but then he gets up and escapes a robot through a revolving bookcase and discovers LEGO figures. Aliens, Elizabeth the First and Mary Queen of Scotland, Mary Poppins also make appearances.

At the end of the advert, the voiceover urges viewers to discover a new movie every day this Christmas.

This is not the first time Elba stars in a Sky advert. In 2017, he fronted a campaign for Sky Q, showcasing its features. The Hollywood A-lister appeared in several spots focused on various capabilities of the Sky Q 2TB box.
He has also starred in Squarespace’s Super Bowl 2019 ad, singing along to a little girl’s rendition of “Que Sera Sera,” in the Breast Cancer Campaign film for Stella McCartney, and in Stella Artois’ “Summer Like You’re on Vacation” commercial. Recently, he has been enlisted by Ford to star in its newest campaign, for the all-new, all-electric Mustang Mach-E.