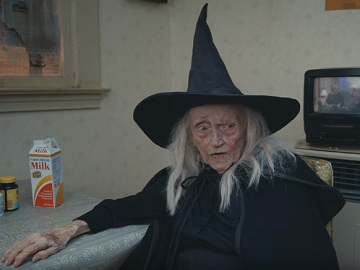 Skittles has released its Halloween commercial, featuring a familiar witch story with a twist.

The spot, created with DDB Chicago and Smuggler Production House, shows an old witch who is annoyed by the young man she had lured into her house with the promise of a lifetime supply of free Skittles. The guy (played by actor Matty Cardarople), who’s in a boiling pot of water eating Skittles, keeps asking for more Skittles to the witch, who begs him to get out of her house. He even shows her a video on his phone of a Skittles ad featuring a witch who begs a teenage boy in a cauldron to eat all the Skittles.

At the end of the spot, the voiceover says the brand’s new taglines “Annoy the Rainbow” and “Regret the Rainbow,” which replace the famous “Taste the Rainbow”.

The Mars-owned brand urges fans on social media to take the Zombie Skittles Challenge. “#Sweepstakes Zombie Skittles have Rotten Zombie flavors lurking in every pack. Gather your friends, take the challenge and share with us using #Sweepstakes, #DareTheRainbow and tag @Skittles for your chance to win!” Skittles wrote on Twitter.