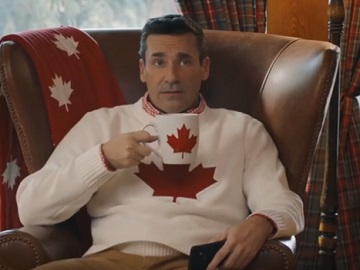 The spot opens with the American Emmy Award-winning actor, clad in a jumper featuring Canada’s symbol (the maple leaf) and holding a cup featuring the same symbol, telling Monty he’s now Canadian and that he ordered from SkipTheDishes to celebrate. Informed that his citizenship was denied, Hamm answers he already bought a bunch of Canadian stuff. When his friend suggests to start his own country, that he could name New Canada, he says he’s a real Canadian and, later on, when he’s asked by Monty if he should go and bring the food order just delivered, he answers in French.

The commercial ends with the voiceover saying the company’s tagline, “You deserve great delivery”.

This is not the first time the Mad Men star appears in a commercial for SkipTheDishes. Skip aired its first ad with Hamm during last October’s NHL season opener and ran a subsequent ad during the Super Bowl in February.

SkipTheDishes, available for on Android, iOS and the web, connects people to local restaurants and food couriers.