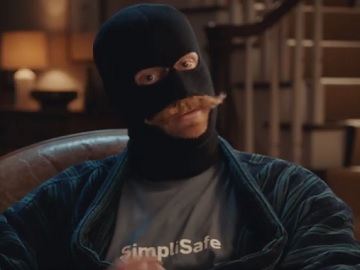 The maker of award-winning home security systems SimpliSafe has unveiled a fictional burglar as its new mascot in the recently launched advertising campaign entitled “Meet Robbert”.

The spot features actor Peter Davis playing Robbert Larson, “a full-time burglar and part-time con man,” as he describes himself, who is also a “home security expert”. Wearing a black mask, he says he knows home security better than most and that SimpliSafe, with 24/7 monitoring, is the only security system he trusts to protect his family and home. He also highlights that SimpliSafe helps police respond up to three and a half times faster, that it watches every door and window, that it has a “freakishly loud siren” to encourage guys like him to leave fast, and that its HD video doorbell lets you see who’s at your door from wherever you are.

Toward the end of the ad, he also says that SimpliSafe is just 15$/month with no contracts and encourages people to get SimpliSafe and protect home like a pro.

Named “the best home security system” by the Verge, the Wirecutter and more, SimplySafe now gives people, for a limited time only, the chance to get SimpliSafe for $15 per month with no contracts, 60-day risk-free guarantee, and free shipping.