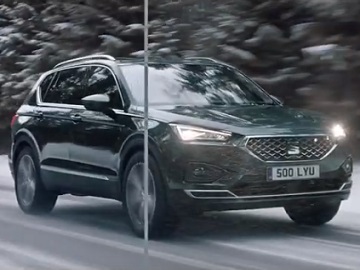 SEAT showcases the new Tarraco in a new ad, that aims to inspire people to follow their passions and dreams, regardless of their age and against all odds, because age is just a number.

The spot, part of the “Why Not Now?” campaign, follows a woman wearing a black wet suit as she’s walking on a frozen lake, in search of a spot to dive into the water. She makes a triangle-shaped hole in the ice (a reference to the sharp full LED headlights that retain the company’s triangular signature) and dives in.

The commercial, which features a series of onscreen lines representing excuses for people not to embark on a such adventure, like “too wild,” “too tired,” “too far,” “too scary” and more, is set to the tune of “Try” by Bugge Wesseltoft & Sidsel Endresen, a song included on the 2002 album “Out Here. In There”.

The advert ends with the onscreen lines “You don’t stop because you get older. You get older because you stop. The new SEAT Tarraco. Why not now?” and with the woman driving her Tarraco back to the city, on the snow-covered road.

Tarraco is SEAT’s third SUV and represents the company’s entry into the large SUV market, completing the family line-up, joining the Arona and Ateca.