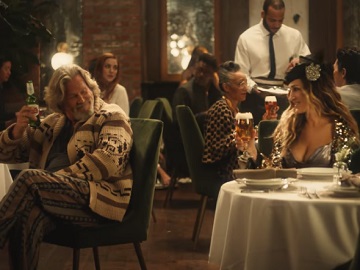 Sarah Jessica Parker stars in a new commercial for Stella Artois and Water.org, but this time together with Jeff Bridges.

Titled “Change Up The Usual,” the spot features the Sex and the City star entering a restaurant and wrecking havoc (with no intention, however) just by saying she doesn’t want her usual drink (Cosmopolitan), but a Stella Artois. Her request is followed by a series of mishaps – the music (played by a live orchestra) stops, a waiter drops a plate and the waitress who was coming with a Cosmopolitan on a tray collides with a co-worker after suddenly turning around and they both fall to the ground. Soon after receiving her Stella Artois in a glass, the restaurant is animated again as Jeff Bridges (known as Jeffrey “The Dude” Lebowski, a Los Angeles slacker and avid bowler, the main character in the 1998 crime comedy film “The Big Lebowski”) shows up wearing a cardigan over his pajamas and asks for a Stella Artois, as well, which is also different with respect to what he used to have. Taking a seat at a table near Parker, Bridges – praised by the latter for his choice, says that “Changing can do a little good”.

The spot, part of the beer brand’s “Pour It Forward” campaign, ends with the tagline “Change Up The Usual” and directs viewers to the “Do Good” section on the Stella Artois website.

Since joining forces with Water.org in 2015, Stella Artois have helped provide access to clean water for more than 1.7 million people in the developing world. The brand informs that, by purchasing its Limited-Edition Chalice, you can help transform lives around the world as, once they have access to clean water, women can care for their families, families can earn an income and pursue their dreams. This is the reason the initiative is called “Pour It Forward,” also stated the brand, whose goal is to provide access to safe water to 3.5 million people in the developing world by 2020 through its partnership with Water.org. Founded by Gary White and Matt Damon, Water.org is an international nonprofit organization that “pioneers market-driven financial solutions to the global water crisis”.

$3.13 provides access to clean water for 1 person for 5 years. Stella Artois will donate $3.13 to Water.org for every Chalice sold.