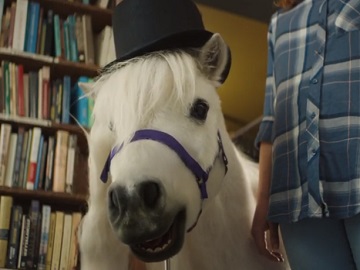 The spot features a young man having a conversation with a friend, a young woman with a white pony that’s wearing a black hat and sings. She says he came with her checking account and that he doesn’t do anything else besides singing. “Your bank have you a one-trick pony?” the guy asks in bewilderment and says, asked about what his bank gave him, that his Santander app does tons of things, like instant card hold and alerts. “Dang!” the woman answers after taking another look at her “pet”.

“You deserve better. You deserve respect. And at Santander Bank, respect, that’s up,” the voiceover says at the end of the commercial.

A previous spot, dubbed “Wild Goose Chase,” featured two men running through a forest while someone is throwing eggs at them. Asked why they are doing this, one of them says his bank sent him on such a “mission” and that it does that all the time. Learning that his fellow receives from Santander an email or text alerts so he always knows what’s going on, the man realizes his bank is messing with him.

Santander’s PROTECHTION mobile app enables users to log in safety, with a single touch, using just their fingerprint or a 5-digit PIN, and performing a variety of actions, such as check their balance, deposit checks, pay bills, cancel or set up AutoPay, change their password, transfer money, activate debit and credit cards, change their ATM, debit and credit card PIN, put a misplaced card on hold, report cards lost or stolen, request replacements, select and customize the alerts they want to receive, refine alert settings, and choose whether to receive them via text, email, or both.